Well, we've finally come to the end of this story.  I'm a little disappointed that I wasn't able to maintain a regular posting schedule for it as I did for some of my previous projects, but I still think it turned out really well.  Thanks for being patient and putting up with me ;p  Definitely learned something about working with fonts too.

Enjoy!  (I may compile the entire sequence into a future post too). 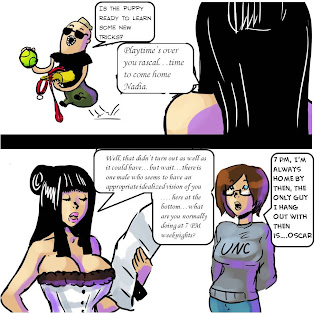 Only a couple installments left.  We'll knock them all out this week.  (maybe just one more installment actually).

Thanks for putting up with my crazy schedule and the long wait.  Only two tweaked pics here - no need to adjust pics with no dialog.  No points for guessing the guest star either ;p

In other news, I think I've settled on an initial kickstarter artist(s)/concept in my head - just need to re-contact them on it. 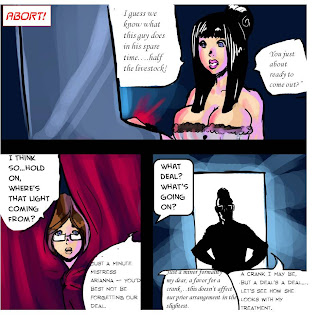 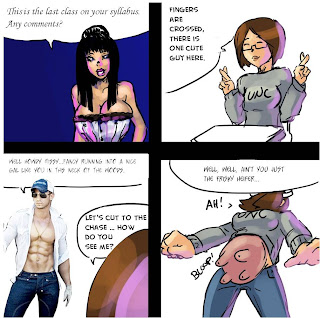 Again....apologies for the break in posting...had to leave town for work again....and had very limited internet access :(

Still, good news - I have the rest of "Looking For Love" from Oppaiman all ready to post - I plan on posting all the remaining 13(!) pages over the course of the next week - starting tomorrow.

Until tomorrow however, you'll have to be content with a beautiful new sequence from mrpersonperson - posted in Gift Art.

Thanks for the poll votes too....hope to have some follow-up on that initial question in the next few days as well.

Continuing the adventures of Nadia - apologies for the delay.  Here we see the results of several more classes:

(unedited versions below the page break). 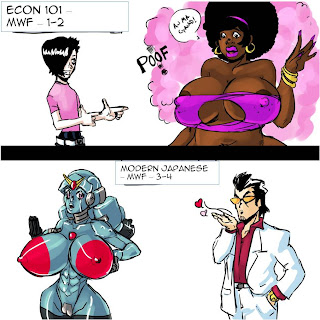 Well, when my work calls....not much I can do about it.  I was expecting to have Memorial Day weekend off...and it didn't happen.  Apologize for the delays in sending donation artwork and responding to other folks.

"Out of Town Pricing" is no longer in effect.

I have several new things to post over the course of this week - including more "Looking For Love" - just trying to get my computer and accounts straightened out after being gone 2 months.  For the moment though, I would direct you to two brand new, beautiful pin-ups by Solios on the Growing Up Gecko page.

Regarding my comments previously on caption pics - I have added my email address to my blogger profile for those interested parties.

On another note, thanks to the uncivil remarks by various anonymous folks, I'm switching comments back to "registered users only".  It doesn't take that much work to get an openid/google/etc account that's compatible with blogger.  I appreciate the vast majority of the comments but there are some that are better left unposted.

With that in mind, I'll be frank up front...there are some good pending commissions up front, and I've got a ton of new ideas for new artists to write up, but things are looking pretty dry on the funds front.  Donations are practically non-existent - I certainly hope nobody is posting these sequences anywhere else.  One suggestion from a featured artist here has been to try tying a few future projects to the "kickstarter" concept.  It's an idea that interests me, but I'll have to research it a little more - still seems like a better sort of funding plan for some of the very large/long ideas I've been trying to initiate.  (Poll to come sooner or later).

Thanks - more arts this week.