Alright….time for the third Art Contest…this one is open to pretty much everything – within few thematic elements. It’s also a little smaller with a shorter deadline (given the holiday period), but hopefully will still be something many of you can work with.
The new deadline is midnight 3 January!
The primary theme here (as previously noted) is alien abduction/experimentation – looking back at some of the retro thematic tropes again. The beautiful woman abducted and experimented on by some horrible little green man or some such…what sorts of awful things will she be subjected to?

The People Have Spoken - 2

Thanks to everyone who voted this week (more than 2x as many as Contest 1!), the Viewers Choice Award for Contest #2 goes to Furmistress for her excellent TG sequence. 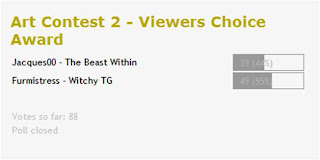 Reproduced below one more time: 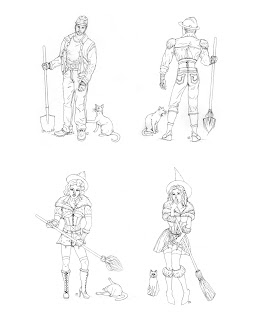 As all Americans (and pretty much the entire rest of the world) know, this is Election Season...you can practically smell the fear.

Who knows who'll come out on top this time next Tuesday?  Does anyone care?  Naturally some folks do....I wish I hadn't been so busy that I ran out of time to request an absentee ballot - first time I've really needed one  (always been able to match my trips home with an early voting opportunity previously).

That said...with just a few days left, the pollsters and interns are hitting the pavement hard, trying to wrap up a few more independent votes while there's still time.  That's where we find ourselves as our story opens today...  (art by engineskye).

Well, I'm always hoping to see comments on my commissions - and I'll be trying some new things pretty soon - but for the time being I need some opinions regarding my art contests.

I've had a grand total of 5 entries between 2 contests (although I've heard quite a bit of interest expressed every now and then from other folks).  Seems a little small compared to other contests I've seen offered by other folks - and just what I was expecting in general.

So the question is - any ideas what is keeping them down?  Is it the requests for multi-pic process sequences?  Is it the topics?  The timing?  Lack of advertising or contact issues?

I'm particularly surprised with this second contest since the topic was pretty broad - although I'll admit it ran for a considerably shorter period than the first one.

Basically, I'd like to try and narrow down what the *primary* issues[s] might be - before I issue the next challenge.  I've got a bunch of ideas to use - aside from the one I already mentioned briefly - but I'd prefer to use a subject that's more likely to wind up with a few more entries if possible.

Wow, I went to bed last night disappointed at an apparent complete lack of entries but woke up to two wonderful surprises in my inbox.

While the number of entries decreased since the last contest - a bit of a surprise since I'd heard numerous statements of interest and certainly tried to promote it more widely than the first contest (not to mention a more general subject matter), the caliber of the entries certainly didn't drop.  Both entries are stunning pieces of work and more than worth their prizes.

First Prize: Jacques00 with The Beast Within.

Now comes the part when all the rest of you need to participate - I've set up a poll - and by midnight 30 October, the entry with the most viewer votes will win an additional prize!  Just in time for Halloween!  Vote Early (but please don't vote often - this isn't a Democratic constitutency ;p) - please just one vote per person.

Stay tuned for details on the next art contest!  And thanks so much for playing.
Posted by Thrandrall at 5:36 PM No comments:

A stunning piece by Jacques00 - a woman attacked by a werewolf is transformed by the beast within!

The first entry in this art contest is from Furmistress.

"The story here is that the evil little cat decided that that grumpy construction worker needed a little ah... modification, and *BOOP* suddenly, he's changing! As you can see, the cat is disinterested in the despair of our poor construction worker. It even takes a bath! But once she's all changed, he's quite self-satisfied. Now he has the perfect witchy companion!"

Just a reminder - all entries are due by Monday midnight (pacific time).

A lot more projects on the way, but some are just taking longer than I was expecting.  Expect several updates this week though.

Posted by Thrandrall at 11:53 PM No comments:

Just a heads up for any TF/TG artists viewing the site - there are now only about 1 1/2 weeks knock something out for the 2nd Art Contest.

Looking forward to those entries.

And as a teaser for Art Contest #3 - start thinking what you might do with the concept of "Alien Experimentation".  I'll post full details once #2 wraps up.

Posted by Thrandrall at 11:48 PM No comments:

A great one-shot by Solios - although hardly a quickie in this case ;p  This concept was obviously the idea behind my earlier "Rodeo Queens" pic - but it took till now to find time to get it done.  But more than worth the wait if you ask me.

Pic below is higher rez than the DA version.  For your viewing pleasure. 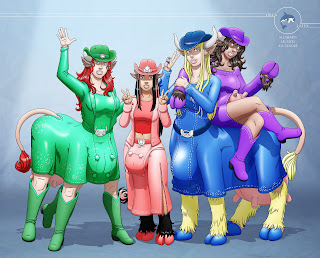 Posted by Thrandrall at 11:45 PM No comments:

Snagged me a quick one-shot pic of Hitman by Snareser.  Love the character, love the comics.  Wish DC'd get off their butts and release the rest of the series in TPB format. 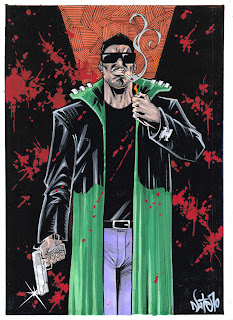 Pics like this or some of the other great stuff Snareser has done - check out his awesome Starman pic - make me feel like ordering more comic pin-ups for commissions as well.  Plan on getting this one framed with the DH horror pics I had done a little while back.  Might price 'em this weekend.
Posted by Thrandrall at 11:44 PM No comments:

Sometimes it just takes a while to pick out the perfect outfit.  Then when you think you've got it right...turns out *you* are the outfit.  Great little photomorph sequence by FurCo.

A little different from some of my other projects, but turned out just how I was hoping. 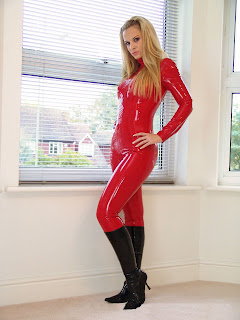