Just a quick update with a couple notes.  First off, the Art Contest Archive has been updated with the Mistress Arianna Contest Entries.  I will probably be starting the next art contest by the end of this month.

Second, attentive viewers may notice that one month from today is a fairly key date in the history of this site.  I expect to have some very special posts in one month - stay tuned!
Posted by Thrandrall at 9:50 PM No comments:

Just a quick breakdown of a couple of things.  Disappointed as I am by the general results of the last art contest - I will still have at least one more this year...just gotta do it given the times...should post a breakdown on it in the next month or so - probably a 6 month time limit or thereabouts.

Don't want folks to think I'm getting into too much of a rut with some of the same artists - though it seems the longer you work with someone, the easier it is...just for discussion, pricing and general quality of visualization.  Still, I'm totally open to working with new artists all the time - a number on my list to check with shortly - and if you'd like to be featured here as well, please drop me a note with a link to your work.  I've commissioned several artists that way already.

Now...a gorgeous piece of artwork by Ian T. Dote - a few years old from well before I started this site - I'd almost forgotten about it till recently.  My first "request granted" piece of artwork - and he gave me permission to post it here!
Posted by Thrandrall at 11:50 PM No comments: 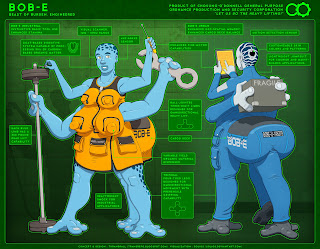 A modified version of my initial conceptual write-up (part of another larger commission concept) - brilliantly realized by Solios.  I have a feeling we'll be seeing these creatures more in the future - at least one more project....and then they might just show up in one of my long-term features.:

BOB-E aka Beast of Burden - Engineered.  A multi-purpose, artificial life form designed, patented and manufactured by Chosung-O'Donnell General Purpose Ordnance Production and Security Corporation (COGPOPSCo).  Initially developed for all-terrain hazardous work in hostile environments, later models have been adapted for civilian purposes particularly in the area of caring for the elderly and disabled.  The majority of these units bear the designator - Imprintable - featuring an advanced organic processor that recognizes and adapts to traits and preferences exhibited by their assigned charge.

In appearance, BOB-E and more specifically BOB-E _I stand an average of 7 feet tall and weighing approximately 400 lbs., bearing primarily female characteristics despite being inherently sexless.  The visual features run more towards the aesthetic and utilitarian.  The default model is completely hairless, with a bald head resting on a thicker, bull neck, larger eyes that are capable of monitoring multiple wavelengths outside the visual spectrum.  Small ears set into the skull, a smaller, flatter nose but with larger nostrils, while the mouth is slightly larger with two distinct rows of molars.  There is an additional sensory organ resembling a large, circular eye on the rear of the skull - primary function is a motion detection for safety purposes during complicated maneuvers.

There is one set of normal-sized arms with human-sized hands for delicate manipulation - matched with a large set of breasts - providing enhanced lung capacity. Below the "normal" however, is a much larger pair of breasts - with significantly larger, longer nipples and two very large, strong arms built for heavy lifting - featuring distinctive 3-fingered hands.  Both sets of arms operate using a custom ball joint design allowing them to operate in a full 360 degrees without losing torque or leverage.

The lower body features three legs in a tripod arrangement with large, flat feet - four splayed toes make them look almost like giant compasses.  The hips are joined in such a way as to allow rapid movement in any direction.  The average 0-30 kph acceleration is 15 seconds and right turns can be made in a split second without losing stability.

The rear of the torso features what could politely be described as "balloon buttocks" - a resting position for cargo or passengers that may be expanded to raise cargo to a more convenient position for stability of movement, interaction, etc.

Between the multiple rows of teeth and the goat-like digestive system - capable of processing 90% of known carbon-based organic matter - BOB-E can not only derive energy to power itself, but also to dispense purified organic material in accordance with the tastes/preferences - fat content, protein, minerals, etc through the large, secondary nipples.

Dressed in the standard, all-purpose coveralls.

Below are the base pics - minus the additional flavor text.

The first and only entry for Art Contest #5.  I can't say I'm not disappointed by the weak showing in numbers, but in-FUR-no has put together an excellent little sequence - captions and all.  I certainly can't think of any reason not to give him 1st Prize!

The breed in question...what else...but a poodle ;p 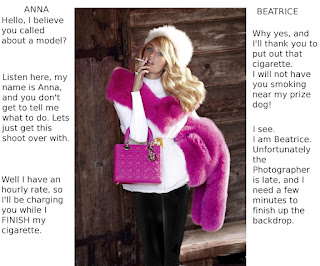